Personal Story: Suicide Is Not A Selfish Act

Personal Story: Suicide Is Not A Selfish Act 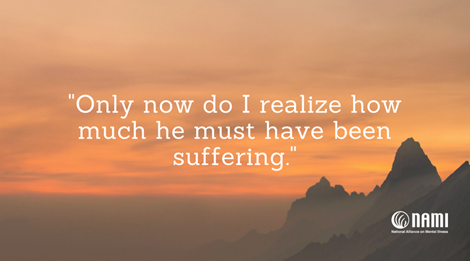 Today, for the first time since Steve died by his own hand in 2015, someone said directly to me: “Suicide is a selfish act.” I was not angry or insulted, but rather very sad that people still believe this to be true. If anything, in the mind of the one who takes their own life, it’s a selfless act. In Steve’s case, his writings and the discussions he had with me before he died, he indicated that he felt he was a burden to those who loved him. In his suffering mind, Steve felt we would all be better off without him.

Based on my experience with Steve, I believe his mind was so tortured and he was in so much mental pain, he was not thinking rationally when he took his own life. That is not what I would call selfish. Steve was the kindest, most giving and thoughtful man I have ever known, and he would never do anything to intentionally hurt anyone.

As human beings, it is difficult for us to relate to mental pain and empathize with what someone so afflicted is feeling. I believe this is one of the reasons suicide is so stigmatized and misunderstood. Most of us can easily understand physical pain since at some point or another in our lives we have experienced some form of it.

I suffered situational depression in the months after Steve died and believe it was in no way even close to what Steve must have felt suffering from clinical depression. The despair and hopelessness I felt were so tortuous I can’t even imagine what Steve was going through in his final days. A few weeks before he died, Steve told me he was so afraid. He could not (or would not) share with me what he was afraid of. Only now do I realize how much he must have been suffering.

I believe there are two possible reasons why some say suicide is a selfish act. The first may be an attempt to comfort the suicide loss survivor(s) in an effort to help shift the guilt burden (blame) to the one who died. The second reason may be that it is easier for them to say “suicide is a selfish act” rather than really try to process why someone would take their own life. Being a suicide loss survivor gives one much more perspective—I hope to use this perspective to educate others.

Hearing these words today was a good thing as it has strengthened my resolve to continue to inspire conversation about mental illness and suicide with the hopes of dispelling myths like “Suicide is selfish.”

When Steve, my soul mate of 33 years, took his own life on March 15, 2015, my world changed dramatically, and my life was turned upside down. I began to take solace in writing about Steve and found purpose in trying to bring more awareness to mental health by telling Steve’s story.