Personal Story: There Is Hope!

Personal Story: There Is Hope! 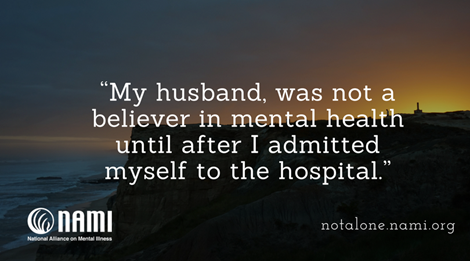 My depression initially began when my grandmother and uncle died within months of each other. At the time, I was working as an RN, and was proud to say I had saved every patient under my watch. But it devastated me that I could not save my uncle from cancer and I could not save my grandmother from sepsis, although neither were my actual patients. Soon, I was deemed mentally unfit to practice nursing and had to go to counseling and take medications. It was ironic because I used to be the mental health RN who encouraged patients to comply with medication regimens and even taught classes on medications and mental health disorders.

I went inpatient for five days and had to see a psychiatrist for almost 18 months until he released me. Finally, I am able to practice nursing again. I applied at every hospital known to mankind. Went on one interview, and before I could get 30 minutes down the road, I received a message that they were not interested in me. Depression introduces itself again, this time in the form of alcohol. My license was then suspended again for testing positive for alcohol, since I had previously signed an agreement not to drink alcohol nor use other depressants to get my license reinstated.

I went to work at Wal-Mart, and worked my way up to a Support Manager. At this time, I was worried about my family, my finances, my daughter away at college, and trying to keep up at work. One day when I got off, I went into my guest bedroom and I got in the bed in complete darkness. I was told that I slept there for three days before someone realized I needed help.

I remember my mother telling me “You need to get up out of that bed—ain’t nothing wrong with you!”

And I remember telling her, “Ma, if I could, I would get up, but I can’t. I just give up.” As I lay there, my hair got matted to my head, I didn’t bathe, and I didn’t remember the last time I had eaten. When my spouse would ask if I had eaten, I would reply yes, but I was only putting food in the trash to make him think I had eaten the majority of some meal.

I called my doctor’s office with a knife to my wrist and asked for help; I told them I needed to see a psychiatrist. They told me that the next appointment available was in four weeks. I hung up the phone.

The only thing that kept me from hurting myself and relieving my family of me was my daughter’s face flashing before my eyes. I put the knife down. This was a Friday. The next morning, I called the hospital and I said I need help, I need a bed. I am depressed, and I had thoughts of killing myself. The hospital stated they had a bed, and that I could have it immediately, but I requested to enter that Sunday so I could spend time with my daughter before she went back to college. I remember trying to Christmas-shop online, but I was so mentally discombobulated, I couldn’t even read. I was seeing things move in the bedroom that I knew were not there.

That Sunday, I packed my bag and I drove myself to the hospital, often with just one eye open because I couldn’t see well with both eyes. My husband was not a believer in mental health until after I admitted myself to the hospital. He used to tell me to take my crazy pill and that the hospital should have kept me. But it took him witnessing mental illness in a person who was close to his family for him to offer support and understanding to me. I went to the hospital, and at first, I would not talk; I was in a daze. The first night I went in the room to go to sleep, and I remember drifting into a deep sleep and sleeping till morning. I would not eat at first.

Long story short, when I left the hospital, I was eating and was on a medication regimen, and had to see a psychiatrist and a counselor. When I made it home, I realized that my mother said what she said and my husband reacted how he did because that’s what our culture is taught: Mental illness is not real. A woman must remain strong, and if not, you are considered weak in the African-American culture.

So, I created a social media forum for women who struggle with mental illness but do not have an outlet. I have only had a few women to reach out, but the forum shows me that there are many people who may still afraid to speak up against mental illness for fear of embarrassing their family.

Today, I am good. I won’t say great because there are days when I want to give up because I feel no one listens to me about mental illness. But I know I am helping some people. I am learning coping skills throughout this journey. I am still not nursing, but I have every hope of returning to that field, if it is in God’s will. If not, I will continue to be an advocate for mental illness and continue to help children and families.

I just want to say to anyone out there: There is hope, there is someone out there who has been through or going through what you have endured. We have to continue to advocate for mental illness and treat it just as we would treat hypertension or diabetes because mental illness is a disease as well.